The name might seem obscure to the uninitiated, but it only takes one little hint for the lightbulb of recognition to shine. At some moment in recent history, carved animals, such as horses, elephants and crocodiles took to the markets and started replacing the classic chinaware in the living room. Over night, Brecciated Jasper was everywhere, adorning bodies and houses alike.

The Strength of Jasper

Worn by shamans and priests, warriors and kings, the Jasper stone has carved its reputation as the stone of strength, virility and stability.

There’s a function and a purpose for every Jasper out there. Not a surprising statement, considering how this dense and opaque variety of Quartz is one of the most versatile stones nature has to offer. It’s also the gem that bears most resemblance to its maker, earth.

When we define an earthy character, words like grounding, directness, lack of inhibitions come to mind. Hailed as the ‘Supreme Nurturer’, Jasper is the stone to embody all of the qualities above.

Understandably, all great civilizations attempting to gain a foothold in history’s ever competing market carved Jasper into wearable amulets.

The Egyptians inscribed the Jasper stones with symbols from their Book of the Dead and adorned their mummified dead with the jewelry in the hope that Osiris won’t be too harsh in his judgment.

In ancient Greece, on the island of Crete, Jasper was mined to produce seals for the palace of Knossos.

The Scriptures mention Jasper as the foundation rock of the New Jerusalem, while the Native Americans utilized the gem as a dowsing device and a rain caller.

Nowadays, we restricted the term to opaque quartz, but the ancient iaspis had a different aspect. Translucent, emerald green and clear, it might have been more akin to the modern chrysoprase. 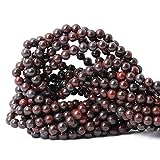 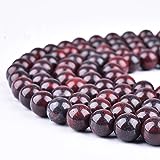 A testimony to the many facets of the Jasper is the multitude of names baptizing it. Some Jaspers carry the name of the region they were mined from, others of their explorers or demonstrated metaphysical qualities. Usually, the titles speak for themselves. Dalmatian Jasper coats a ring with a pale gray dark-spotted hue, while Orbicular Jasper traces circles of different colors gravitating towards a central black point.

Now, imagine a precious stone like an empty white canvas, and Jasper the work of art of Jackson Pollock nature. This is Brecciated Jasper.

Brecciated Jasper wanders the spectrum of red. The rich brownish crimson of a forest in autumn, the brick red of the working class suburbs of East London, the creamy reddish swirls of a strawberry smoothie, the tanned red of a sunburn, this stone is a striking mille-feuille among Jaspers.

Well, the name does mean ‘spotted or speckled stone’.

The stone’s composition makes the whole recipe possible. The iron oxides embedded in the stone mix with the organic material and the crowding of colors stems from the mineral content of sediments and ash. Jasper is a variety of chalcedony. It doesn’t obey by a simple design, or uniformly colored stones, simply because of the inclusion of foreign elements in its making.

Is the reason you’re always sure to get a Jasper stone with attitude, be it multicolored, spotted or branded.

But what is brecciated? The ‘breccia’ are angular pieces that have cemented together into a solid mass, leaving the brecciated Jasper graceful even in an unrefined state.

A variety of the Brecciated Jasper, the Poppy Jasper is patterned with bright red orbits amongst shades of brown, yellow and black. Loyal in character to the name, it resembles a field of poppies and brings forth intense feelings of passion.

The Stone and its Powers

Brecciated Jasper is believed to have such purifying qualities as to clear any chaotic, confused mind. It gives perspective on life, without having to adopt the proper distance from it. It can be used to vacuum the dust off past experiences and solve internal conflicts or crisis.

Legend speaks to its healing properties. Evil spirits avoid its presence, snakes and spider bites don’t cast their venom under its influence. Other medicinal values name the Brecciated Jasper’s ability to strengthen a weak stomach and alleviate gynecological pains. It offers protection against vision gremlin and drought.

That is legend, but there’s also science contributing to the promotion of Brecciated Jasper. The stone contains hematite, an important ore of iron and a reddish-black mineral consisting of ferric oxide. If you experience liver, spleen or pancreas pains, the stone might prove an effective way to alleviate them

A glass of Brecciated Jasper will scare away the haunting of constipation and weight gain, fever and toxins.

It removes negativity from the room, acting as a sort of regenerating and regulating feng shui device. It instills a holistic feeling of wholeness, integrity and calmness. The base and sacral chakras are stimulated, and the energy traffic increased.

Sexual Brecciated Jasper is used for overcoming sexual guilt and settle down any sexual aggressive tendencies. It might also point to a sexually compatible partner. Bear in mind that Native Americans did use it as a dowsing rod.

Sci-fi writers might have well used Jasper to prophesize the future. The stone has served as a witch’s crystal ball for centuries. Dreams filter through the stone and unravel their secret meaning to whoever cast Freudian dream analysis aside as psychological bogus.

All you need is a yoga mat, a settled breathing rhythm and a piece of Jasper to slide down into a meditative state. Use Jasper for the first few minutes, then make the switch to a particular stone that is more conducive to your desired session.

Jasper is nature itself. Each stone is a work of art, either soft and tender in style, earthy and brash in form, balanced and harmonious in essence. Brecciated Jasper is just one of the many masks this stone can carry through the ages.