Chrysocolla Malachite – The Hybrid of Empowerment and Protection

For many gemstone collectors, the harmony that the Chrysocolla Malachite blend creates is enough reason to include it in their collection. Not only for healing purposes but just for the piece of mind of having that little bit of harmony in an ever-chaotic world. If you don’t have this Chrysocolla Malachite mix, make sure to add it to your collector’s list, and here is why.

Chrysocolla is a stone known for its stunning colors and its calming effects. This stone comes in a variety of colors but is often a vivid blue-green colored and frequently mistaken for Turquoise. This stone can be found wherever large copper deposits occur and is often found intermingled with Malachite and Azurite, creating a mixed gemstone known as the Eilat stone.

Since Chrysocolla is a copper-bearing mineral found wherever copper deposits occur, such as the southwestern USA, England, France, and Australia, the stones colors generally come out in a variety of green shades.

Considered as one of the gentlest stones, its believed to soothe, calm and inspire. It is also known to promote level-headedness, to encourage clarity of thought and to help teach the empowerment in feminine energies, “teaching that genuine power is best expressed through gentleness.”

Malachite often is found in a tubular form and is an intense green color that has been used for thousands of years for carved ornaments, jewelry and is often found mixed with Azurite and Chrysocolla.

Some of the first Malachite deposits were located in Egypt and Israel, and these areas were mined and used to produce copper. The material was also used to build sculptures, and create pigments, and gemstones.

Because of its vivid color, Malachite was used as a pigment for thousands of years and was used as one of the oldest known green colors used in paintings.

Also popular as a gemstone, the vivid green color, its banding and eyes, and bright polished luster make it a favorite stone for collectors.

Malachite is known as the transformer and is known to personify the deep healing green of nature. This stone is known as a protection stone and absorbs negative energies and pollutants from the atmosphere and the body.

Because Malachite is the transformer stone, it encourages change and is said to help break unwanted ties and promote the expression of feelings, alleviate shyness and support friendships and empathy for other people.

Chrysocolla Malachite Come Together in The Eilat Stone

While both stunning on their own, Chrysocolla and Malachite come together in a beautiful gemstone known as the Eilat stone. 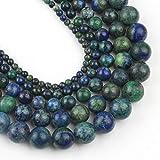 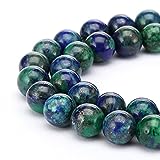 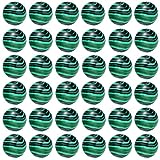 The Eilat stone is the national stone of Israel because it was first found in the Sinai Peninsula in Israel, near a place called Eilat. These stones are also known as the King Solomon Stone because they were mined quite extensively under his rule. The mine is said to have been in the Timna Valley of Israel.

These stones can often be found polished but are also used to create stunning Eilat jewelry.

It is believed that the Eilat has strong emotional based energy but is even thought to create a calming and balancing reaction.

The Eilat stone comes together quite nicely and is seen as a balancing stone because of it’s unique makeup.

It is also believed that the Eilat stone can absorb many kinds of pain, making it an excellent stone for emotional and physical healing. While it is considered to aid in relieving fevers and inflammation, it is also said to help assist with both bone and tissue healing, which can also help with liver and adrenal issues since it’s thought to aid in tissue regeneration and cellular structure.

As enticing as these physical healing properties may sound, always remember that no gemstone is a substitute for medical professionals. If you have a medical condition, you should always consult a physician before trying alternative therapies.

Chrysocolla Malachite Stones Stun Both Alone and Together

Both the Chrysocolla and Malachite stones are stunning in their own ways. And yet, when they come together, they are equally – if not even more – beautiful. Used in jewelry and crystal healing, they all hold their own unique properties. And when combined, it seems as if they have the best of both worlds.