Crazy Lace Agate, which is also known as Mexican Agate, is considered newer in comparison to many other gemstones and can only be found in Chihuahua, Northern Mexico.

While Crazy Lace Agate is becoming ever popular, it is only one of many varieties of agate.

Agate comes in many forms and colors, hence why it is often called the Earth rainbow. This stone is a translucent variety of microcrystalline quartz that is used as a semiprecious stone.

Agate occurs in a variety of colors in nature, including brown, white, gray, pink, yellow and red. According to Geology.com, the different colors are caused by various impurities and are produced as groundwaters of varying composition seep into the cavities of igneous rocks.

The different colors of agate generally are the result of the location in which the stone is found. For instance, Blue Lace Agate comes only from Namibia and South Africa, while Dendritic Agate can be found more readily in India, Australia, Madagascar, Mexico and even the USA.

Agates have been used as gemstones for thousands of years and were some of the first stones fashioned for use by people. These gemstones are created into a variety of items now, including small sculptures, beads, cabochons and even more unusual objects like bookends.

With Agate deposits are generally extensive, these gemstones are inexpensive, though if a particular gem is has a fine, sharp banded pattern and strong natural coloring, the cost and value of the stone will go up accordingly.

The Beauty of Crazy Lace Agate

The Crazy Lace Agate is a banded microcrystalline quartz infused with iron and aluminum and usually comes in very intricate patterns. The colors often consist of browns, blacks, golds, and grays, but sometimes reds and pinks are found within it’s delicate swirling patterns. In fact, the swirling pattern of this stone is one of the reasons it has its name as the design resembles lace.

While some enjoy Crazy Lace Agate jewelry, it is becoming a very popular stone in the crystal world because of its positive nature.

While Crazy Lace Agate makes for some beautiful jewelry thanks to its more neutral colors, it is is also popular amongst crystal enthusiasts. Also known as the “Laughing Stone,” the general vibe given by this stone is one that is both balancing and protecting.

Crazy Lace Agate is believed to help increase energy and encourage concentration. Because of its emphasis on focus, it is believed to be helpful for those with ADAD because it not only represents focus but also promotes inner stability, composure and maturity. 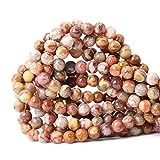 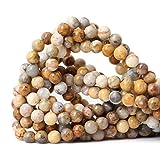 When this stone is placed on various parts of the body, it is believed to help with a wide variety of physical ailments.

Crazy Lace Agate is said to stabilize the aura and helps to eliminate and transform all negative energies, helping to cleans the mind, body, and soul.

Because of its calming nature, Crazy Lace Agate is thought to help individuals who supper from depression overcome their negative feelings by elevating their thoughts. Crazy Lace Agate is believed to absorb emotional pain, helping those not only with depression, but those who suffer from low self-confidence, negativity and bitterness.

While all the above physical and emotional benefits are very encouraging, please remember, gemstones are no replacement for professional medical help. If you have a medical condition, you should always consult a physician before trying any alternative therapies.

Crazy Lace Agate – The Stone of Encouragement and Optimism

While Crazy Lace Agate is only one of the many forms of agate out there, it is quickly becoming a favorite gemstone. With its calming patterns and more neutral colors are appealing to both the eye and for many, the soul.

Crystal and gemstone collectors alike include Crazy Lace Agate in their collections for a variety of reason, and while they are beautiful, crystal healers are more drawn to it for its metaphysical properties. Because this stone’s nature is a calming one, it is an excellent stone for meditative purposes and for helping an individual release the negativity that may have built up over a hectic day.

If nothing else, Crazy Lace Agate is just a beautiful stone to have. Do you have one in your collection?